skip to main | skip to sidebar

The 14th Annual Rutabaga Curling World Championship was held in the usual bitter cold on Saturday, December 17, 2011, at the Farmer's Market in Ithaca, NY.  Commissioner Steve reports that "this year's curl was great as usual" and Gold Medal Winner Steve Paisley will surely be a great ambassador for our sport." Steve adds that Mr. Paisley's enthralling account, "The Man with the Huge Oblong Rutabaga", was "done so well that it really gives the flavor of our event from the eyes and mind of a contestant!" Highly recommended (including photos)!

It is with some sadness, but also with profound gratitude and congratulations, that we note the following from Commissioner Steve:


"I myself am stepping down as Commissioner (16 years is enough!) but am handing the role into the able hands of our Ithaca Farmers' market to be run by a Curl Committee as it seems like it will take at least 20 people to replace me!"

Steve, rutabagans everywhere will miss you and your unwavering support for global rutaculture -- be sure to keep in touch!

Now humans can literally "veg out!" A transgene of the common rutabaga (Brassica napobrassica) has been genetically modified in ARSI labs to permit treated human skin tissue to simulate photosynthesis and, in optimal sunlight conditions, generate +/- 1.23 kilocalories every 24 hours. Photosynthesis begins within 72 hours after topical application of a green gel (designated as GL-4A) made from rutabaga extract and continues for at least two weeks. Imagine the possibilities!

An independent review by the U.S. National Academy of Sciences found: "The photosynthesis rate can be enhanced through ingestion of copious quantities of organic herring or kelp emulsions.  The possibility of making drastic reductions in human caloric requirements on a planetary scale has profound implications that hardly need to be elaborated."
The NAS study adds: "A collateral benefit is a demonstrable improvement in memory. Induction of the rutabaga cDNA in experimental adult subjects corrects the olfactory memory impairment found in rutabaga mutants. Induction of the cDNA only during the larval and pupal stages was inconsequential to performance in olfactory memory tasks."
The original ARSI analysis found just one known side effect: "GL-4A creates a lasting greenish cast in the affected area" (as shown in the photo of one of ARSI's experimental subject).
Update: The U.S. Surgeon General has given tentative approval for sale of this product everywhere except the Pacific Northwest.  The Surgeon General found that GL-4A would be ineffectual in that region unless it was applied in "toxic quantitities."  ARSI is appealing that portion of the decision.


[Stay tuned to this blog and ARSI's website for additional updates.]
Posted by M.J. O'Brien at 3:29 PM 3 comments: 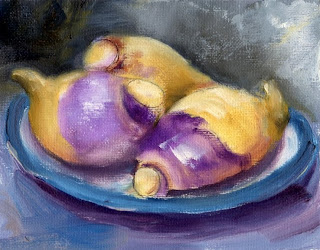 This week's guest blogger, Diane at "The World's Fare," precedes her latest (and very informative) entry on the noble rutabaga with this quote from Garrison Keillor, whose enthusiasm for our favorite root vegetable is unsurpassed anywhere on the planet:

"So many people confuse rutabagas with turnips. They're not alike at all. Rutabagas have a pleasant yellow-orange color, large friendly-looking leaves, and a smooth dense texture. Turnips are fish-belly white and purple on top like a bad bruise and have hairy leaves and taste brackish, like swamp water. Rutabagas are the root crop that any sensible person would prefer."

Finally, ARSI takes long-delayed pleasure in announcing that The Oregonian, via Diane's blog and its own OregonLive website, has finally recognized Forest Grove as the Rutabaga Capital of the World Since 1951.

We look forward to joining Diane and The Oregonian in getting out the word on all the festivities that are planned for the International Year of the Rutabaga.


The dramatic winning roll of this world-class annual event at the Farmer's Market in Ithaca, New York, which took place in December 2009.  ARSI sends its congratulations to all participants for another spirited contest.

And here's a look back at the memorable Podium Moment and victory speech from the 2008 competition:

And, finally, a rousing Rutabaga Chorus from the choir in 2008:

Artist of the Month: David Gilhooly and his "Frog Series" 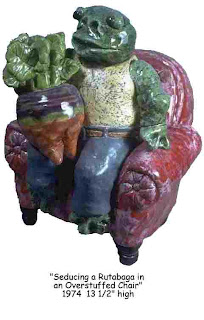 Gilhooly's Work of the Month:  "Frog Seducing a Rutabaga in an Overstuffed Armchair" (1974)
This courageous and groundbreaking work, best viewed as an animated GIF, delicately explores the amorous lives of a rutabaga and a frog.  It's part of the collection of the Burlington Art Centre (Ontario), which describes the work as follows:
"Frog in blue jeans and a sleeveless shirt with a turnip [sic.] on its knee in a stuffed rose-coloured armchair with wooden feet; made during the time Gilhooly was in Canada."  [With respect, I suggest that it's time for the curators of the BAC to appreciate the obvious differences between rutabagas and turnips.]
Posted by M.J. O'Brien at 9:46 AM 2 comments:
Labels: artist, frog series, gillhooly

Rutabagas in literature: "From beyond the stars..." 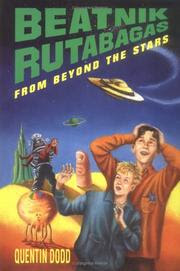 As the literary influence of the rutabaga expands on earth, new horizons are rapidly opening up in space.  Quentin Dodd's novel is a case in point.
Publisher's Weekly offers the following summary:
"In the spirit of Douglas Adams's Hitchhiker series comes a spunky debut novel about teenage science-fiction fans recruited by feuding alien races to serve as commanders in a major battle. Everyboy Walter Nutria agrees to help the Lirgonians, who look "like chubby middle-aged men... [in] too-tight pajamas with built-in feet, mittens, and hoods." His almost-girlfriend Yselle ("It's not like we've been out on dates or anything, but we watch movies together all the time," says Walter) is strategizing for their enemy, the Wotwots, who look like giant rutabagas. It's a wild ride, especially since the spaceships break, mysterious mice keep stealing everything in sight, and neither group of aliens has any military skill or even common sense. They're especially given to kvetching about each other: "I don't have to take this from the culture that plays kazoos at its weddings!" screams the Wotwot captain. Eventually, the teenagers convince the aliens to unite in persecution of the havoc-wreaking Space Mice, and they all wind up saving the universe from a power-mad villain named Doctoral Candidate X. This is not for readers who like their characters rational: people risk their lives out of boredom and believe unbelievable lies. But Dodd's agenda is laughs, and his extravagant imagination matches well with his flippant writing style. A lighter-than-air read that opts for wit over logic. Ages 10-up."

At last: A recipe for Rutabaga Pudding 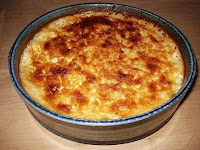 Kudos to Kara L. Kraemer of the Yakima Healthy Foods Examiner for her informative comments about the rutabaga and two tasty recipes: mashed rutabagas and winter rutabaga pudding, as well as a passing reference to ARSI's website.

[Photo: rutabaga pudding fresh out of the oven, sprinkled with nutmeg.] 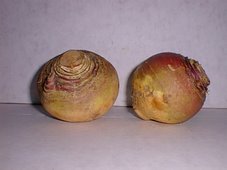